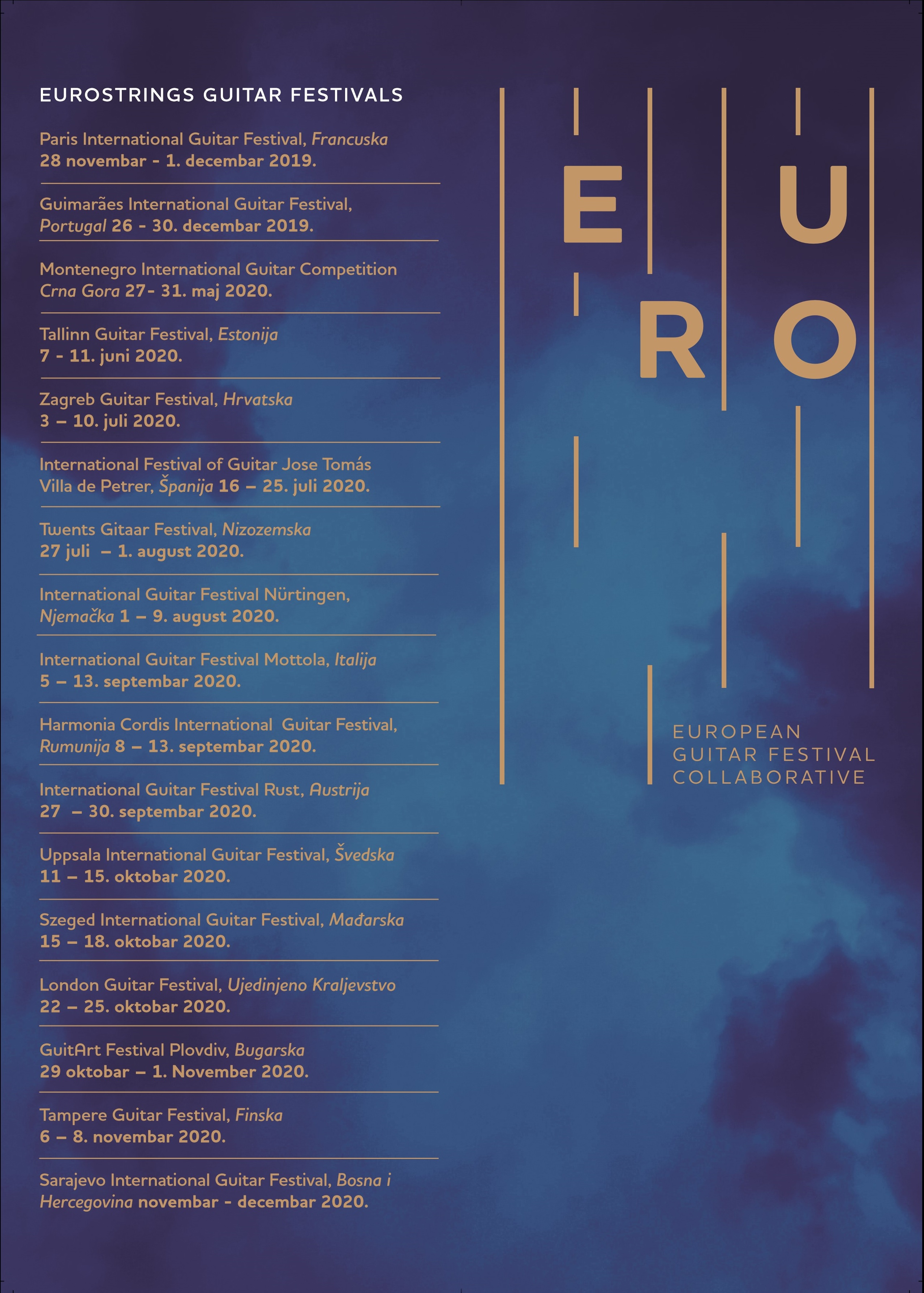 EuroStrings creates a hub of international opportunities for emerging guitar players from Europe and beyond, educational and training programs that foster their professional development, supporting the trends for sustainability of festivals in the field of classical music. The platform brings together guitarists and their audiences, breaking down barriers while actively participating in the creation of classical guitar experience.

Through the exchange programme, EuroStrings strongly supports the circulation of emerging talents among the platform’s guitar festivals, offering the EuroStrings Artists the opportunity to perform at several EuroStrings festivals where they can reach international audiences and further educate themselves thus developing new skills and knowledge necessary for pursuing an international career and accessing new markets. The EuroStrings Exchange Programme is implemented on the basis of a specially developed EuroStrings curriculum.

The one-year EuroStrings Exchange Programme is implemented according to the EuroStrings Master Curriculum that includes:

After completing the EuroStrings Exchange Programme our artists are ready for the new challenges of a professional world career!

Starting from 2018, EuroStrings Artists will have the opportunity to learn from great masters and to perform side by side with established international musicians gathered under the name EuroStrings Ambassadors.

The highlight of the Eurostrings Exchange Programme is the EuroStrings Competition – the first European competition open only to the winners of the international competitions of the European guitar festivals. The winner of EuroStrings competition will get the opportunity to play solo concerts throughout Europe, Asia and America in 2019/2020, enabling him/her to develop a world-wide career. In addition to the tour, the winner will receive a prize of 8,000€ gross. The second edition of EuroStrings Winners’ Competition will take place in London, 18 July – 21 July 2019, during the IGF Summit.

The EuroStrings Exchange Programme is co-funded by the Creative Europe Programme and is free for the winners of the international competitions of the festivals that are members of the EuroStrings Platform. In addition to the aforementioned programme, the EuroStrings Artists receive a scholarship of 200€ for each festival at which they perform.

To acknowledge the financial situation of many young guitar players and to support their international education, EuroStrings has developed an annual scholarship programme for students from lower income backgrounds. This scholarships will enable young guitarists to participate in Eurostrings Festivals international guitar competitions and masterclasses.

With the aim to diversify our audience by reaching youngsters and youth without musical education coming from socially disadvantaged areas and to deepen the relationship with our current youth audience by creating better experience for them, EuroStrings Festivals will develop a variety of activities and methods to engage new audiences.

With an aim to encourage the creation of new repertoire for classical guitar, EuroStrings initiated Composition Contest for Classical Guitar. The competition aims to promote emerging composers of any age whose works have not yet had the chance to gain international recognition. Applicants should either have European citizenship or be based and active in EU countries/territories. The winner of EuroStrings Composition Contest will receive a cash prize and the winning composition will be a compulsory piece to be performed at the final of the 2nd EuroStrings Winners’ Competition.

The platform will organise 3 annual EuroStrings seminars opened to all professionals from the field of classical music with different lectures and workshops in the field of audience development, marketing and PR, fundraising, cultural management, cultural tourism.

Building a Knowledge Base about Classical Guitar Festivals

The platform will conduct relevant surveys and research which will be put on the website to serve as resource for festival organisations and policy-makers and underpin the platform’s strategic planning. This will give a comparative perspective to the knowledge of the European classical guitar festivals.

To learn more about the EuroStrings visit the website: www.eurostrings.eu