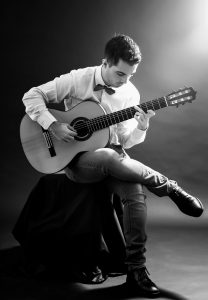 Pablo Menéndez
Pablo Menéndez was born in 1992 in Asturias, Spain. Since he was very young, music captivated him and he started playing guitar at the age of 10. Some years later he moved to San Sebastian, where he studied his Bachelor with the prestigious guitarist Marco Socías, finishing with the highest qualifications.
Since 2014, he studies with the great Maestro Carlo Marchione in the Conservatory of Maastricht (Netherlands), where he gets his Master degree, being awarded “cum laude” in 2016. Afterwards, he continues studying with Zoran Dukic, Pablo Márquez, Paolo Pegoraro, Lorenzo Micheli, Judicael Perroy, Antonio Duro and Francisco Bernier, in the context of Sevilla’s Guitar Master Degree.
Beside his academic formation, he enrolls plenty of courses and masterclasses to complete his musical evolution, as well as complementary formation on contemporary music, new musical languages and improvisation.
He also studies orchestral conducting under the guidance of Maestros Miguel Romea and Andrés Salado.
He has been awarded in several national and international music competitions, such as Concurso Internacional “Juan Crisóstomo de Arriaga” in Bilbao (Spain), Twents Gitaaar Festival (Enschede, Netherlands) or Gevelsberg Guitar Competition (Germany).
As a soloist, Pablo has given concerts all over Spain, Germany, Netherlands and Italy during the last few years. He also has an intense chamber music labour, which took him to record a CD together with the tenor Joaquín Pixán and the pianist Mario Bernardo, in which they recorded Spanish music from the XIX Century. Moreover, he worked as an orchestral player as well, being a member of the Spanish Young National Orchestra during the season 2014/15.
Nowadays, Pablo combines his concert activity with his pedagogical labour as professor at the Higher Conservatory of Córdoba (Spain).